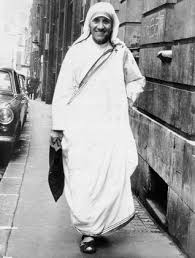 When I do my Believe in You seminar, my
example for “Express your true goals” is Mother Teresa. She exemplifies:

All Mother Teresa wanted to do was become a nun
and teach. She achieved that. But when she rode the school bus to chaperone students
picked up at their homes, her world changed. On those early morning rides, she
saw poor families waking up on the streets of Calcutta. What really grabbed her
heart were the trucks scooping up those who had died during the night. She felt
compelled to do something. She asked her Mother Superior, but the answer was
no. Their convent and school were set up to teach, with limited funding. They
could not care for the poor, too. Mother Teresa understood but was frustrated.

She pondered, prayed and visualized what she could do. Then went to Mother
Superior again. She was told that if she wanted to work with the poor she’d
have to leave their nunnery because that was not their mission. She continued
teaching, with the people of the streets on her mind. One day traveling by
train, the little voice within her (we all have one) said clearly and directly
that she had to care for them.

She resigned, not a simple thing to do. Left the comfort of her nunnery. With
one white sari and one coin in her pocket, she walked out to the streets she
had traveled by school bus. Her reputation spread as she tended to those dying
in the streets where they lived. She begged at homes and businesses for money
and supplies. She truly cared, could be trusted, had no hidden agenda. Soon, a
few former students gave up what they had and worked alongside her. Thus began
the Missionaries of Charity.

Mother Teresa became an international phenomenon
caring for the poorest of the poor so they could die with dignity. She was the
little nun that could. A humble powerhouse, with a vision brought to life.

The ultimate entrepreneur: she saw a need, visualized possibilities, believed
she could make a difference, took action despite the odds.

We all have thoughts, ideas, visions we want to
act on. You don’t have to give up all you have and live on the streets (unless
that’s in your heart to do), but what could happen if you took action on what
is in your heart to accomplish at work and at home?
Visualize it.
Express your true goals.
Listen to your inner guide.
If the thought is in you, you can do it.