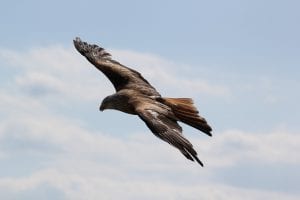 She (I’ll call her Naomi) came to the Mastermind call angry about a situation. She needed to talk it out. The situation involved a leader who is dismissive of Naomi and her department, except when he needs something. She was dreading a meeting at HQ in a couple of days because he had not collaborated with her on the content to be presented. Her attempts to work with him had been futile. In the six months since HQ moved her into this role, the only way she got things done was through relationships she developed with people in his department. But he was a power broker, and now some of them feared being seen talking with her.

We asked questions to get Naomi to view her situation from different angles. Her mindset began to open up. As she talked, she thought about what she could possibly do to work more successfully with him and maintain her solid reputation with HQ. Her focus shifted from the immediate situation to what she could do to strengthen the relationship.

Using her powerful internal lens (we all have one), Naomi zoomed in and then out. Like an alligator on a riverbank keenly observing her surroundings, then like an eagle soaring high for a broader view. As she changed the way she looked at her situation, new possibilities emerged.

Naomi shifted her thoughts from the repeated, aggravating tape of their latest conversation to a bigger picture, including pressures from HQ. She considered his perspective, his reputation, his goals. And she considered her reason for being there, her reputation for taking the high road, and her long-term goals.

As we wrapped up our Mastermind call, she was in a calmer, more open frame of mind. Thinking aloud as she responded to questions and insights from the group led to a breakthrough idea she believed could have long-term mutual benefit for both departments. She had moved from anger to hope, with a strategy she would start to put into action that week.

This coaching conversation was a great reminder that occasionally we all get stuck replaying old tapes in our mind. Sometimes we need a whack on the side of the head, or perhaps a gentle nudge, to notice what we are thinking is not the only way to view a situation. There are always other possibilities. And whenever we hold a possibilities mindset, we are open to a much broader and creative realm of solutions.

Contact Mary to learn what you can do to draw out your best thinking.